The Open Door Policy that African people have for others comes with a price. I’m going to keep reiterating this until my group wakes up. The following information comes from Kenyans.co.ke.

DCI, The Director for Criminal Investigations, has confirmed the arrest of four Chinese nationals after a video of a Chinese man beating his Kenyan worker went viral. Made public on Saturday, February 8, the video shows a Kenyan man being whipped by a stick while others laughed. This incident took place at a restaurant in Kileleshwa, and DCI has released the following statement:

“Following reports of an incident doing rounds in sections of the press depicting a man of Asian descent assaulting a male employee said to be working at a hotel, this morning detectives from Kilimani raided Chez Wou Restaurant in Kileleshwa in pursuit of the matter.”

Two chefs, Chang Yueping and Ou Qiang, were accused of conducting their operations in Kenya with expired visas; Qiang was found without a work permit and was thus working illegally. DCI also arrested Yu Ling, a cashier holding a visitor’s visa but no work permit. The detectives later announced that 8 Kenyans who worked at the hotel were escorted to Kilimani Police Station for further interrogation. 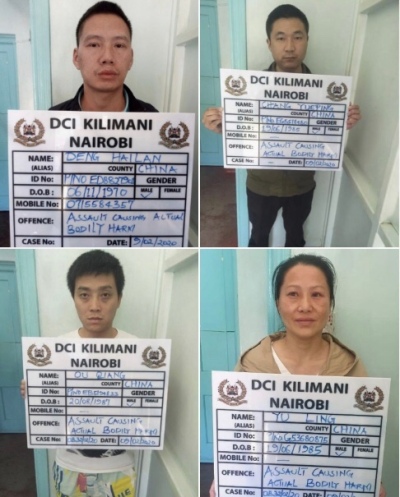 Although this incident has been resolved, the fact that it took place, to begin with, frustrates me. Chinese migrants setting up shop throughout the continent is far too common, and I’m sure this isn’t the only time this has happened.

You can check out the full article by clicking here. If you have any additional information, feel free to comment below.