I just finished rereading Subterranean, and I wanted to share my thoughts.

Then a volley of gunfire from an automatic weapon echoed across the cavern. It wasn’t Khalid! He struggled again with his gag. Maybe he could work free of it, call to whoever it was for help.

More gunfire erupted. Was it coming closer? He listened. Blood thundered in his ears, making it hard to judge.

More blasts. Yes! He struggled more frantically. Then a thought occurred to him and he froze. What were they firing at? 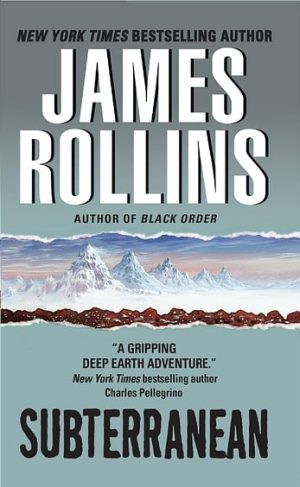 Taking place beneath the Antarctic floor, James Rollins’ Subterranean follows archaeologist Ashley Carter and her team of specialists hand-picked to uncover the riches of an underground labyrinth. The history and mystery awaiting them, however, are minuscule in comparison to the dangers that lurk below. Carter’s team isn’t the first to take on this mission and those who have never made it back.

As mentioned in a previous post, James Rollins does a great job blending history, science, and adventure into a page-turning thriller reminiscent of an Indiana Jones film. Subterranean didn’t disappoint in that department. The main characters and the central storyline also kept the pace upbeat, which was necessary at times due to the abundance of information. One character, in particular, provided the right amount of comic relief in an otherwise intense situation.

My only issue was with the subplot that, in my opinion, wasn’t needed. It didn’t tie into the main storyline, did nothing for the main characters or their development, and it just came across as a page filler. Rollins is very thorough when it comes to describing a setting, backstory, or time/event. So adding an additional plot to support an already dense story arc was unnecessary.

Amazonia remains my favorite Rollins novel, but Subterranean was still a pretty good read. I would recommend it to anyone with a vivid imagination and an interest in spelunking.