In a previous post, the topic of marriage and its current value in the new millennium was discussed. The main argument was that only half of Americans are married and 40% of unmarried adults believe marriage has now become obsolete. Well, this recently led me to start questioning the value of family, more specifically the nuclear family. I know my inquiry might come across as offensive to some, but it’s a valid question nowadays. Since marriage is no longer culturally relevant, particularly here in the United States, could the same thing be said about the nuclear family?

My response would be “no.”

Western society has defined the nuclear family as a group of people who are united by ties of partnership and parenthood and consists of a pair of adults and their socially recognized children; the adults most often being a man and a woman. But since “traditional norms” have now become problematic in the liberal sense, I started researching nuclear family values in relations to spirituality, more notably African Spirituality. 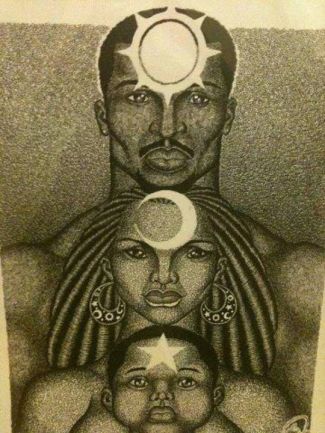 African Spirituality acted as the righteous base in ancient Africa, with ancient Kemet or KMT (Egypt) being one of many in African societies. Amen Par Ankh advised that the mother, father, and child was the original Holy Trinity. The ruling law was Maat, “and under Kemet cosmology, Maat is designed to avert chaos and maintain truth; the symbol for truth, justice, balance, and order is the Goddess Maat.” So going against this rule of law would be going against nature or universal law, as some would say.

Being anchored in a nuclear family and experiencing the masculine/feminine balance that my father and mother brought to the home, gave me a different perspective on the relationship between men and women. We need each other, especially when it comes to raising children. Boys and girls learn aspects of manhood and womanhood from seeing it demonstrated from their parents. But, somehow, this natural order has now become devalued and even criticized at times. Some adults arrogantly try to argue the point that traditional unions and households no longer hold any relevance, or that single parenthood and co-parenting are just as effective as two-parent households. Which is disingenuous, and the data proves it:

In no way am I trying to shame anyone who didn’t grow up in a nuclear family, because one size doesn’t fit all and I know that statistics don’t apply to everyone. But I am going to defend this family structure and be unapologetic about it. Men and women naturally bring things to each other and their children, and when all parties are on a certain code of conduct, the end result tends to be more positive than negative. And regardless of whether you base this union around an organized religion or form of spiritually, the power of this trinity ultimately can’t be duplicated or replaced.