That was a clip from Eddie Murphy’s 1987 stand-up comedy film, Raw. Although it was meant for comic relief, there was some truth to what he said. As a society, we tend to romanticize marriage by illustrating one’s union based on their wedding reception and honeymoon photos, without reminding ourselves of the fact that marriage, to some extent, seems more like a business: the legally or formally recognized union of two people as partners in a personal relationship. Murphy made reference to an aspect of the business that many speak out against when he discussed divorce settlements and ex-spouses who receive half of unearned benefits. And what I found interesting, upon doing some research, is that marriage nowadays may be on a decline because of it.

According to Virginia Magazine’s article on The Marriage Crisis, only about half of Americans are currently getting married; only 20% of Americans are getting married before the age of 30, and about 40% of unmarried adults believe that marriage is becoming obsolete. As to the reasons why, well, the article mentioned the women’s liberation movement in the late 1960s – 70s, easier access to birth control, the outsourcing of jobs that can cause work instability, and the 50% divorce rate as being some of the major culprits to this new millennial ideology. However, I dug a little bit deeper and I found out who’s really behind this wedding bell demise. 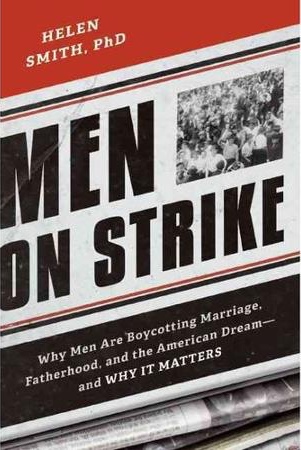 Yes, fellas, it’s on us. This is 30 to 40 years in the making, but we’ve been opting out of marriage, according to Dr. Helen Smith. And for good reason.

I know, ladies, how could I say such a thing? I’m going to tell you why, but before I do, please consider purchasing Dr. Smith’s book, Men on Strike: Why Men Are Boycotting Marriage, Fatherhood, and the American Dream – Why It Matters. Because she’s going to give you a detailed explanation as to why you may not have a ring.

Here are a few key points that I took from the book.

For the Public Record: A Documentary History of the League of Women Voters had a very interesting excerpt that seems to coincide with the low marriage percentages.

William Blackstone, the leading writer on English common law, stated in 1769 that “by marriage, the husband and wife are one person in the law…the very being or legal existence of the woman is suspended during the marriage, or at least is incorporated and consolidated into that of her husband under whose wing, protection, and cover she performs everything…her condition during her marriage is called her coverture.”

I’m not going to say it, but they are right about karma. Because of those who came before us, it looks like gender discrimination is starting to shift; which is causing a ripple effect on the relationship between men and women, their marriage, their children, and society as a whole. As a single man, the euphoric symbol of marriage is beautiful but the politics and business behind it need to be reassessed for the better. If not for this current generation, then for the ones coming after us.

Gabel, A. (n.d.). The Marriage Crisis. Retrieved March 19, 2017, from http://uvamagazine.org/articles/the_marriage_crisis