As a continuation of my previous post, there have been some updates in the Middle East. The following comes out of CBS News.

In retaliation to the airstrike that killed General Qassem Soleimani, Iran launched missile strikes against two military bases in Iraq. More than a dozen missiles targeted the Al Asad and Erbil military bases, with the Al Asad housing 1,500 U.S. and coalition forces. Iranian Foreign Minister Javad Zarif defended the attacks by tweeting that Tehran “took & concluded proportionate measures in self-defense. We do not seek escalation or war, but will defend ourselves against any aggression.”

In regards to casualties, President Donald Trump tweeted the following: 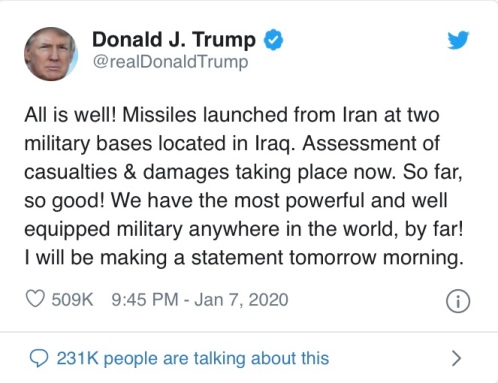 For more updates, you can check out the full article by clicking here. If you have any additional information, feel free to comment below.