I’ve been trying to stay abreast with international news, specifically with Africa, and came across some information that led to further research. According to BBC News, there have been a few protests throughout Paris, France regarding immigration. The demonstrators behind this are called “The Black Vests.”

The “Black Vests” migrant protestors, who are mainly from West Africa, are against deportations and in favor of legal papers for all. They’re organized by the migrant support group La Chapelle Debout, and they’ve named themselves after the Yellow Vest Protest movement. The group is demanding to speak with Prime Minister Edouard Philippe about stopping any financial, material, logistical, or political participation in deportations. And so far, their presence is being felt.

What stood out to me about this situation was the fact that most of the protestors are from West Africa. France’s history with West Africa, particularly their colonial rule, is no secret. French West Africa (French: Afrique accidentale française, AOF) was a federation of eight French colonial territories in Africa: Mauritania, Senegal, French Sudan (now Mali), French Guinea (now Guinea), Côte d’Ivoire, Upper Volta (now Burkina Faso), Dahomey (now Benin), and Niger. This led me to do further research. 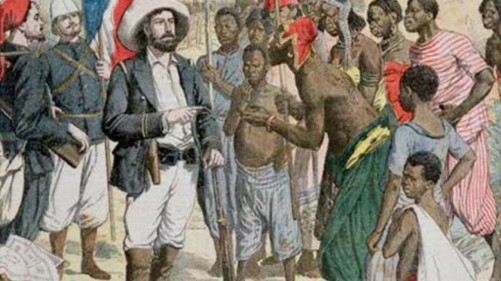 Early European appearances in West Africa dates back to the 15th century AD when Portuguese traders made contact with coastal West Africans. The Spanish, Dutch, British, and French began to establish their presence, primarily for trade. They traded slaves, sugar, pepper, ivory, wax, and gold during this period, with gold being a major factor. West Africa represented important possibilities for the expansion of European powers over the next five centuries.

Throughout the latter part of the 16th century and continuing up to the middle of the 19th century, the Trans-Atlantic Slave Trade expanded in West Africa. The slaves were primarily for New World Plantation economies, and the transfer of African people eventually became a dominant economic activity for Europeans. The French’s participation in the Trans-Atlantic Slave Trade was always less significant than their European counterparts. Their main focus was on gum arabic, groundnuts (peanuts), and other raw materials in that region.

Saint-Louis, Senegal is where the French began what would be their colonial project. Their goal of increasing their stake in West Africa was influenced by similar policies from their fellow European counterparts, with industrialization and economic conditions in Europe influencing the expansion of European interests. British and French imperialism followed, and the French began a major push eastward into the savanna regions under the direction of General Louis Faidherbe. However, Faidherbe and his successors were met with strong resistance from the Moors, the Toucouleur Empire of Segou under Al Hajj Umar, and Almany Samori of Wasulu.

In February 1885, the Berlin Act was signed. France, Germany, Britain, and Portugal all had interests in West Africa, and this Act provided guidelines defining their territories. By 1890, the French signed treaties with several African leaders, and they negotiated these treaties from a powerful military position. Their expansion was then linked to superior firepower.

The Black Vests protests don’t seem like a coincidence, considering the history between France and West Africa. In my opinion, independence from colonial rule on the continent should be the top priority. But since there is a karmic effect to taking things that don’t belong to you, what’s going on in France and other European countries is inevitable at this point.