As hopeful as this clip was, I still found myself annoyed—not with Hurricane Harvey survivors, the Richard family, but with the circumstance. Because this scene and the results are all too familiar.

For the past few weeks, there have been several debates on climate change, chemtrails, and even spiritual-based theories regarding the natural disasters that are happening here in the United States. But all I could think about during the most recent ones, Harvey and Irma, were the victims; particularly the most marginalized group affected by those storms…Black Americans.

Following the 2013 tornado that struck Moore, Oklahoma, the NAACP issued out a report advising that African Americans are less likely to be well prepared for natural disasters and are more inclined to be displaced and criminalized as a result. “Our socio-economic vulnerability is based on multiple factors, including pervasive lack of wealth to cushion us, oft-compromised quality of housing stock in many of our communities, our relative lack of mobility.” If you add the lack of urgency (if any) from the emergency response teams, you’ll understand my annoyance to these situations. But the aftermath and its effects towards my community isn’t anything new.

The Great Mississippi River Flood of 1927

In a previous post, I provided data which proved that most blacks in America are a part of the working poor. So please don’t condescend in the comment section with delusional responses about “not having it that bad,” because these natural disasters prove otherwise. Instead, let’s talk about some possible solutions. The most obvious would be money, but since the conversation about reparations seems to be so problematic, here are a few of mine: 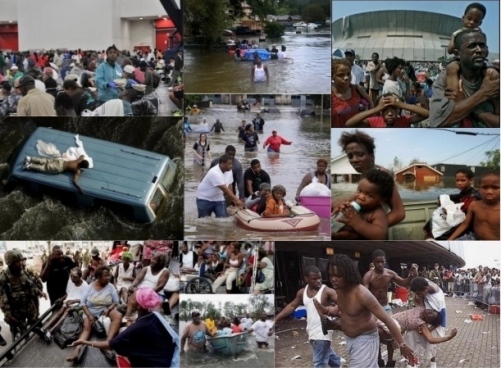 Ellison, C. D. (2017, August 29). Race and Class Are the Biggest Issues Around Hurricane Harvey and We Need to Start Talking About Them. Retrieved September 13, 2017, from http://www.theroot.com/race-and-class-are-the-biggest-issues-around-hurricane-1798536183

Shabad, R. (2017, September 4). How Hurricane Harvey’s cost stacks up against past disasters. Retrieved September 13, 2017, from https://www.cbsnews.com/news/how-hurricane-harveys-cost-stacks-up-against-past-disasters/

Shapiro, I., & Sherman, A. (2005, September 19). Essential Facts About The Victims of Hurricane Katrina. Retrieved September 13, 2017, from https://www.cbpp.org/research/essential-facts-about-the-victims-of-hurricane-katrina