I finally had a chance to see the most talked about film of the new year, Black Panther, and had to write a review. Check out the following trailer if you haven’t seen it already.

The story follows T’Challa (Boseman) who returns to his home, Wakanda, after the death of his father to take his rightful place as the new King and Black Panther. But succeeding his father’s throne becomes a challenge when the fate of Wakanda and the world is put at risk. T’Challa then must use the power of The Black Panther as well as his country’s allies to defeat those who are trying strip the country of its resources and destroy the planet.

I was pleasantly surprised at how much I enjoyed this film. The promotion, social media buzz, and debates that took place prior and after its release initially turned me off from supporting it. But me being the indecisive devil’s advocate that I am, eventually gave into the hype and ended up loving this 2 hours and 15-minute experience. The storyline and intriguing characters kept the narrative flowing smoothly, but it was the visual elements of culture that stood out to me the most. Africa and its imagery, fashions, dance, languages, combat, and technological advances broke every negative stereotype that I’ve seen throughout my lifetime.

Although there was an award-winning supporting cast that helped accentuate the story, I would be doing a disservice if I didn’t shout out my favorite character of them all: 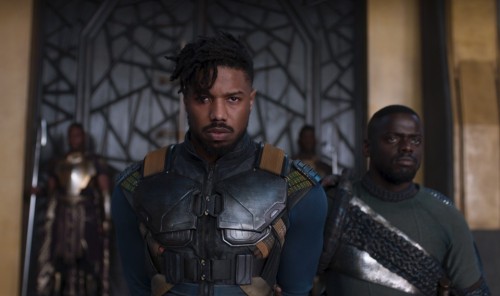 I heard about Michael B. Jordan’s portrayal of Erik Killmonger from the day this film was released and I have to admit, he KILLED this role. His charisma and mental instability made for a great villain, but it was his social/political messages that resonated with me the most. No, I won’t spoil anything for those who haven’t seen it but I will say that, as a student of history, there were some much-needed and appreciated points I’m glad were shared.

Black Panther definitely lived up to its hype, so much so that I’m ordering my ticket for the second round. This was a fun film, with a great message and immaculate cinematography, and I can’t wait to see what the future holds for this franchise.